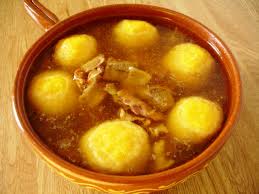 Directions
Bread
http://southamericanfood.about.com/od/breads/r/sopaparaguaya.htm
Sopa Parguaya
Sopa Paraguaya is a rich and tasty cornbread. I've read several explanations for why the name of this cornbread translates to "Paraguayan soup." One theory is that the recipe resulted from a long ago failed corn soup experiment. Another says it's because it's often served with soup. The name may not make sense, but sopa paraguaya is a wonderful accompaniment to many dishes (including soup!).
Prep Time: 20 minutesCook Time: 45 minutesTotal Time: 1 hour, 5 minutesIngredients:Preparation: